Xavi Henández forgot no-one in his Barcelona farewell, at the Auditori 1899. From the club members and fans who have showed their affection for him to the presidents and coaches who have coincided with him during his long career at ‘Can Barça’, he remembered them all. The player and captain, recalled his time as a […] 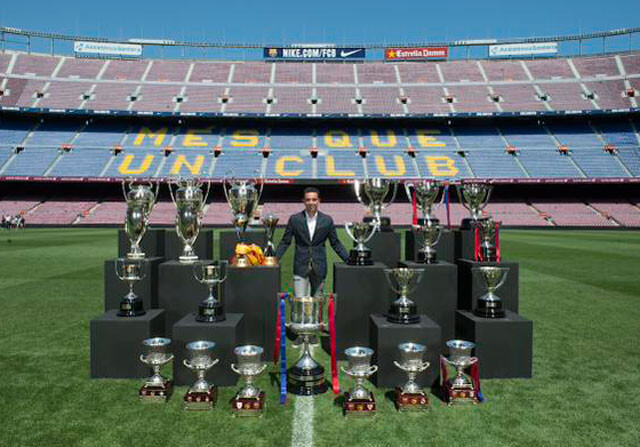 Xavi Henández forgot no-one in his Barcelona farewell, at the Auditori 1899. From the club members and fans who have showed their affection for him to the presidents and coaches who have coincided with him during his long career at ‘Can Barça’, he remembered them all. The player and captain, recalled his time as a player at the club he started in at the age of eleven and to which he will be “eternally grateful”. “Thanks to Luis Enrique and Andoni Zubizarreta, who convinced me not to leave a year ago, luckily I didn’t because if I had I’d be pulling my hair out now.” He also had a few words for his team-mates in the Spanish national team, with a special mention for Luis Aragonés: “Although I’ve already said farewell, I would like to say thanks to everybody at ‘La Roja’, people I’ve had such great times with. Luis Aragonés, wherever you are, know that I will never be able to thank you enough for all you did for me” said the captain.

Lastly, Xavi said that he would like to leave the club with just one title more, the Champions League, which Barcelona will fight for against Juventus this coming Saturday. “I hope this is not so much a goodbye as ‘a see you soon’. Visca Barça and Visca Catalunya” he concluded.

Before he took to the stage, both the president Joep Bartomeu and his team-mate Andrés Iniesta had a few words to say and coincided in one thing: Xavi is leaving, but he will be back. Iniesta thanked his team-mate for everything he has given to the club and everything he still has to give: “It’s hard to believe that when we start training next season, you, who has shown us what it means to defend this crest, won’t be here with us … It has been a privilege to play by your side. Thank you for your example, for thinking about the team rather than yourself. Thank you Xavi for everything that you have given us. Every ‘Culé’ knows that you have defended the blaugrana shirt, that you’ve done it with love and passion and that’s why we all know you will return, because this is your home.“