Blaugranas come flying out of the blocks and defeat Los Angeles Galaxy 1-2 with goals from Luis Suárez and Sergi Roberto Up-for-it Barça get off to a good start in LA Luis Enrique‘s Barça made a bright start to their pre-season against Los Angeles Galaxy, in a clash that was marked by the tremendous atmosphere […] 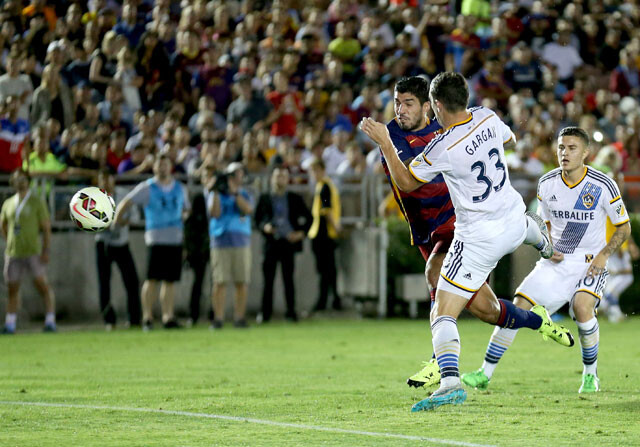 Luis Enrique‘s Barça made a bright start to their pre-season against Los Angeles Galaxy, in a clash that was marked by the tremendous atmosphere at the Rose Bowl Stadium, Luis Suárez and Gerrard meeting up once again, and the surprising intensity of the azulgrana side in the opening thirty minutes, which was unusual for a pre-season fixture. Thanks to this early momentum, Barça’s domination was clear, though they were unable to create many clear goal-scoring chances.

Busquets and Rakitic, well supported by Sergi Roberto, gave the machine room a sense of order and dynamism, while the mobility of Pedro and Luis Suárez made it easy for balls to be played in from deep. Douglas, playing on the right, gave a good account of himself. Missing the precision necessary in the final few yards, which was understandable this being the first game of the season, Barça were unable to find their way through to goal initially, until Luis Suárez latched on to a loose ball in the area, with a whiff of suspicion of handball, to put the visitors ahead. Steven Gerrard’s LA Galaxy, meanwhile, tried to look for opportunities on the break but their possession and attacking play was very poor.

After the break, and many substitutions, with Iniesta, Piqué and Jordi Alba now on the field, the visitors looked determined to highlight the difference between the two sides. Within ten minutes of the restart, Piqué had a chance to double the lead after a superb pass from Iniesta, but shortly afterwards it was Sergi Roberto who scored the second goal with a low, hard drive. Barça, until then comfortably in the driving seat, then began to give the hosts more space and more of the ball and let them create a few chances. Both Masip and Suárez had to make late interventions while Lasiter had a clear chance to get the Galaxy’s first goal but skewed the ball wide. The game, by now being played at a pace more in tune with the occasion, seemed to be languishing when Sandro hit the crossbar with five minutes remaining. In stoppage time, Meyer reduced distances when he took advantage of a corner that was poorly defended by Barça. Despite this soft late goal, Luis Enrique will take a lot of positives from this victory, above all the commitment showed by his players, especially in the turbo-charged opening spell.