The solitude of Pedro the hero

Pedro,Barcelona’s saviour in the UEFA Super Cup final against Sevilla, lived in a very special way what may have been his last appearance in the azulgrana shirt. Before the game, he announced to the Barça Sporting Director, Robert Fernández, that he wanted to leave the club, as Fernández confirmed on TV3. A few hours before the […] 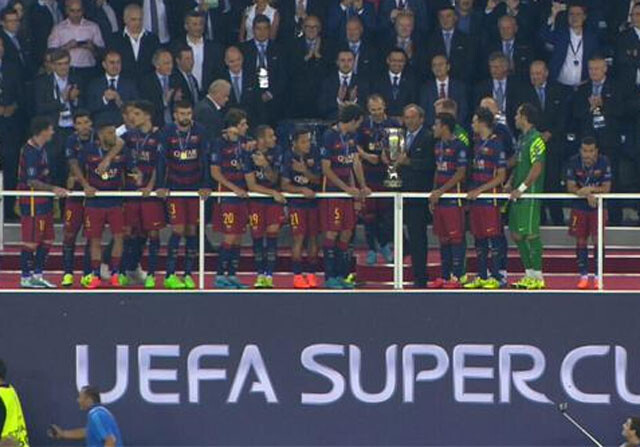 Pedro,Barcelona’s saviour in the UEFA Super Cup final against Sevilla, lived in a very special way what may have been his last appearance in the azulgrana shirt. Before the game, he announced to the Barça Sporting Director, Robert Fernández, that he wanted to leave the club, as Fernández confirmed on TV3.

A few hours before the match, Pedro was told that he was not going to be the substitute for Neymar and that he would be on the bench. From there, he saw Barcelona score again and again against Sevilla, build up a 4-1 lead and then watched how Emery’s side fought back and levelled the game. Luis Enrique, meanwhile, continued without giving him a chance to play until the beginning of extra time, when things were not looking good.

Pedro took to the field and on his face it showed that something special was passing through his mind and his body. He was playing his last minutes in the shirt and was dreaming of scoring the goal that would give his team the Super Cup. When it looked like it was going to penalties, Pedro suddenly appeared. Once again, the man from Tenerife had turned up at the right moment to save Barça, and from the moment that the ball slammed against the roof of the net all the bottled-up rage came pouring out. His celebration said it all. Touching the Barcelona crest, he leapt into the Georgian night sky, biting his lips to not shout what he was feeling, as well as the joy, naturally.

If in the goal celebration he had not shown enough of his feelings, the moment in which the trophy was handed over was more symptomatic: he could be seen standing apart from the rest of the group, leaning on the railings, looking up to the sky, perhaps thinking about his reasons for leaving. When Iniesta hoisted the trophy aloft, and his team-mates leapt up and down with joy, he applauded from a distance and affectionately hugged Carlos Naval, the team delegate, everybody’s friend.

Later, Pedro went back down on to the pitch and with the happiness that goes with sadness, posed for photos with the cup and his captain, Andrés Iniesta. A last photo, this time alone and with the trophy, which he kissed with sadness, he handed it over to Rakitic, and got lost in the joyful confusion of the fourth azulgrana celebration of the year. Pedro’s last as a Barcelona player, unless someone remedies it.