Spain shine against the inventors of football

Spanish national side back to their best · Mario Gaspar scores a brilliant goal · Fans cheer Piqué Spain shine Spain outplayed England, who were overwhelmed by a La Roja side who resembled the team they used to be. Spain’s dominance was amply reflected in the number of interventions that Hart was obliged to make, […] 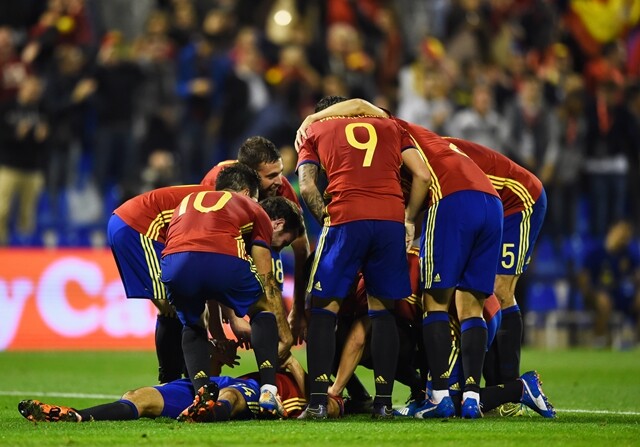 Spain outplayed England, who were overwhelmed by a La Roja side who resembled the team they used to be. Spain’s dominance was amply reflected in the number of interventions that Hart was obliged to make, while Iker Casillas was barely troubled all evening, apart from one excellent save well into stoppage time.

Vicente Del Bosque set up his team to play attractive football, shoot a lot and score goals. The national team’s attitude left a good taste in the mouths of their fans, playing, as they were, against the only team that had won every game on the road to qualification for next summer’s Euros.

Spain’s control of the game brought its reward in the form of two goals. The first, the work of Mario Gaspar, was excellent. In the 68th minute, the Villarreal wing-back received a ‘spoon’ pass from Cesc, swivelled and did an overhead volley that looped in over Hart into the far corner. The splendid goal set the crowd at the Rico Pérez stadium alight. Spain’s second came from Santi Cazorla who took advantage of another quick passing move and the England defence’s momentary lack of concentration.

The bad news to come out of the game was that Thiago felt a twinge in his right knee and had to go off, to be replaced by Cazorla. The midfielder noticed something strange in his already-damaged knee after a fall, so went off as a precaution and to prevent any further harm.

Spain overran the inventors of football and eternal favourites to win something at some point in the modern age. Del Bosque’s side now face another stern test in Brussels, against Belgium, currently the number one national side in the FIFA ranking. The hosts will want to show the reigning European champions just why they have achieved that top spot in the ranking.

Temas relacionados: Spain shine against the inventors of football