Cristiano Ronaldo did not have the best of nights in front of goal in his team’s meeting with Almería. The Portuguese forward tried over and over again but a combination of poor aim, a defender, and even one of his own team-mates, thwarted his attempts to get on the scoresheet. After Barcelona’s exhibition against Getafe, […] 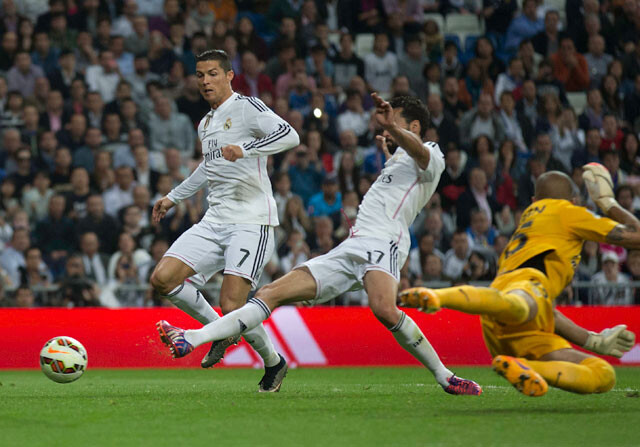 Cristiano Ronaldo did not have the best of nights in front of goal in his team’s meeting with Almería. The Portuguese forward tried over and over again but a combination of poor aim, a defender, and even one of his own team-mates, thwarted his attempts to get on the scoresheet. After Barcelona’s exhibition against Getafe, which saw Messi add two more goals to his season’s tally, Cristiano wanted to take advantage of lowly opposition to widen the gap between him and the Argentinean in the race to be top scorer. Cristiano remains on 39 while Messi is now only one behind, which could be three if the Portuguese had managed to convert a couple of the chances he had against Almería.

In the first half Cristiano took two direct free-kicks which went over the bar. One of them actually skimmed the woodwork while the other went well wide of the mark and caused Rubén no problems. In the second half he had two very clear goal-scoring chances. In the first, Toni Kroos’ centre that was directed at Cristiano was intercepted by Mauro, who turned it into his own net. Ronaldo raised his right hand and indicated clearly that he had not scored the goal. Then, Arbeloa robbed him of his second chance. Chicharito finished a move down the left with a pass to the far post, where Cristiano was waiting, only for Arbeloa to get to the ball first and score Madrid’s third goal. The forward did not look too pleased, but Arbeloa played down the incident in the mixed zone after the game: «I’m not bothered about it. And if I’m not bothered about it, nobody should be bothered about it… I do get it, there’s a lot at stake in his race with Messi.»

Cristiano had not forced his fifth yellow card against Celta with the idea of scoring against Almería, but the plan did not work out for him. Now, with Messi snapping at his heels, if he aims to win the ‘pichichi’ trophy for top scorer in the league, he will have to score on Saturday against Sevilla at the Sánchez Pizjuán. Right now, however, it seems Messi has a slighlt better nose for goals than the Portuguese.