An excited CR7 was paid tribute for his goalscoring record at Real Madrid Cristiano’s smiles Real Madrid held a special tribute event for Cristiano Ronaldo today to mark the occasion of his becoming all-time top scorer for the Blancos with 324 goals (though for others, he still has not reached that tally and is on […] 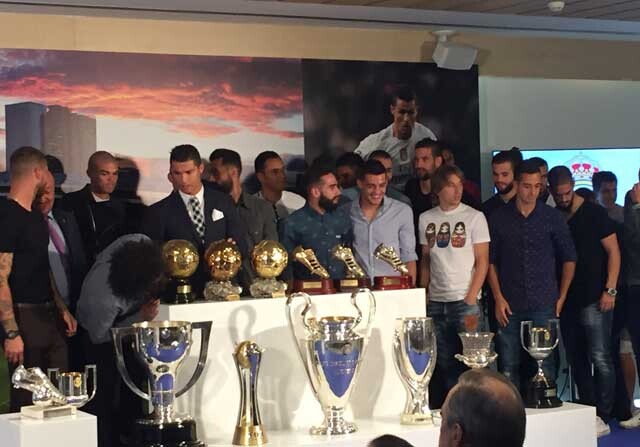 Real Madrid held a special tribute event for Cristiano Ronaldo today to mark the occasion of his becoming all-time top scorer for the Blancos with 324 goals (though for others, he still has not reached that tally and is on 323) in the VIP box at the Santiago Bernabéu Stadium. During the event, a video showing a collection of the goals that he has scored over the seven seasons that he has been at the club was shown, and the president and the player himself took part.

Florentino Pérez, in his speech, highlighted Cristiano’s winning mentality, his enthusiasm and his desire to keep on scoring: “This is a very exciting day for all Madrid fans. With talent and determination, you can achieve eternity… This week Cristiano became the leading goalscorer in the great history of Real Madrid, the greatest club in the world, who have had legendary players like Di Stefano and Raúl, players I would like to pay tribute to here… 324 goals in 304 appearances is something that is unrepeatable… Cristiano, Real Madrid, club and fans, love you and adore you because you know what you feel for this club. You are an example for all those who aspire to a career in sport… I know that you now only want to keep on bettering yourself. Nothing has stood in your way. You are now the all-time leading scorer at the club which is the winner of 10 European Cups. Long may the legend continue”

Then it was the forward’s turn, and he spoke without a script, from the heart: “I am honoured to receive this prize. When I put on the Real Madrid shirt for the first time, I never imagined that I would be the top goalscorer in the history of the club, the greatest in the world. Firstly, I would like to thank my teammates, who are here, because without them, this trophy would never have been possible. I also want to thank all of the managers I have had, from Pellegrini, who was here when I arrived, as well as Mourinho, Ancelotti and now Benítez. I want to thank them as they have always helped me throughout my career. I would like to express my gratitude to the president for this nice event that has left me feeling very touched and happy, and if I have forgotten anybody, I apologise. Hala Madrid!”