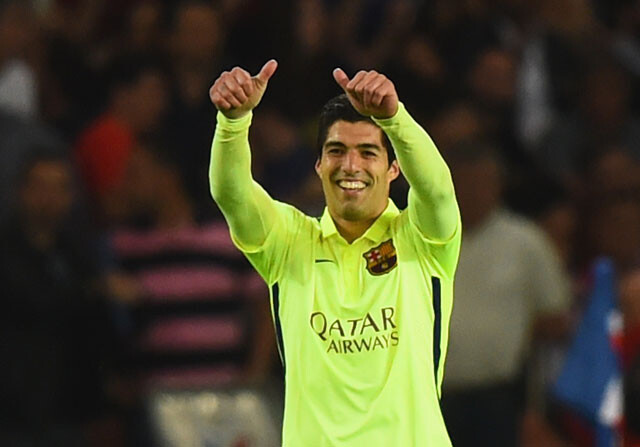 Luis Suárez is beginning to show what he is really capable of at Barcelona, as he did last season at Liverpool when he won the Golden Shoe award, level with Cristiano Ronaldo after scoring 31 goals in 33 appearances. The Uruguayan has begun each of the last two seasons in the same way: watching from the stands owing to being suspended, in both cases for biting an opponent. Suárez missed the first five games of the Premier League last season because of a punishment that had carried over from the previous season, after sinking his teeth into the Chelsea player Branislav Ivanovic’s arm. This season, the Uruguayan missed the first eight games in La Liga owing to a four-month ban he was handed because of his famous bite on the Italian defender Chiellini during the Brazil World Cup.

His performances since returning from suspension have not, though, been the same. At Liverpool, Suárez marked his reappearance by scoring a brace and then four more times in the first month after his return. At Barcelona, this was exactly the time it took for him to get his name on the scoresheet. The striker played his first minutes in the azulgrana shirt on October 25th, in the first ‘Clásico’ of the season at the Santiago Bernabéu, but would not find the net until he opened the scoring against APOEL Nicosia on November 25th, exactly a month later.

It is precisely in the Champions League where Suárez is giving the best of himself. The culé ‘number 9’ has put in his best performances in a Barcelona shirt in the European competition, scoring twice both in Manchester and in Paris in the round of sixteen and in the quarter-final first leg. Even still, the Uruguayan is not thinking of becoming the top scorer in the competition, but “just reaching the final, because I always wanted to play in this tournament, and for Barcelona,” he said on the eve of the second-leg clash with Paris Saint-Germain. So far, he has found the net on six occasions in the competition, which makes him fourth top scorer after Luiz Adriano (Shakhtar), Leo Messi and Cristiano Ronaldo.

The level that Suárez demonstrated during his first months in the Ciudad Condal was not that which had been expected after his last fantastic season in the Premier League. At the same point last season, the then Liverpool striker had scored 30 league goals, while so far this season at Barcelona he has managed a total of 19, 11 in league competition, two in the Copa del Rey and six in the Champions League. In his favour, however, his performances have improved markedly in recent times, to the extent that nine of those goals have come just in the last month and a half. Suárez recognises that his early days at Barcelona were not easy, but that he has been helped by the “confidence that my team-mates and manager have shown in me right from the start, despite the criticism.”

‘Lucho’, who Luis Enrique started off playing out on the right wing in his three-pronged attack, spoke to the Cadena Cope radio station at the beginning of April and explained what could well have been the key to his recent improvement. “One day I ended up in the ‘number 9’ position for a game, owing to the rotations. Then came the moment when Leo said to me ‘stay there’. The manager then saw that we had hit upon a good solution and started to try it out” says the Uruguayan.

Whether it was due to rotations, a decision of Messi’s or a strategy of Luis Enrique’s, what is undeniable is that Luis Suárez is beginning to show the best version of himself since he arrived at the Camp Nou. This evening he will come face to face once again with Salvatore Sirigu. The PSG goalkeeper is one of Suárez’s favourite victims; he has beaten him three times so far this season. The Champions League will now give him another chance to show that he is Barcelona’s natural ‘number 9’, and why he won the Golden Shoe last year.