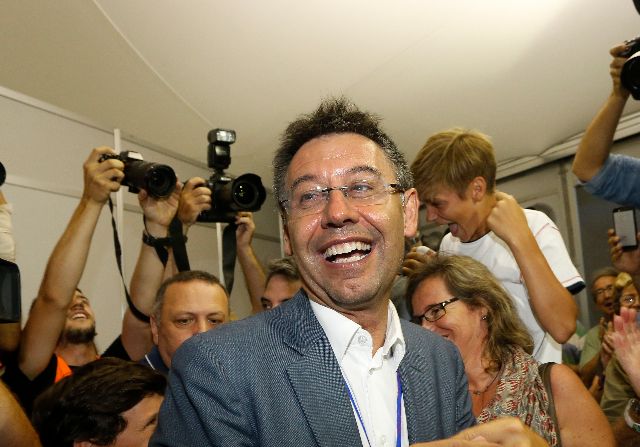 Josep María Bartomeu has been elected as the new president of FC Barcelona for the next six years, until the 30th of June 2021, after winning the elections with more than half of all votes cast. This was the desire of the club members who turned up to vote at the Camp Nou throughout the whole of Saturday. Joan Laporta was a close second, while Benedito and Freixa finished far behind.

In his first appearance after the final results had been announced, Bartomeu thanked the Barça fans for their support: «Thank you, because on this perfect day we have shown that we love Barça and that we are the best club in the world, we have shown that off the pitch as well.» He also thanked his rivals in the presidential race, for their «fair play, throughout the campaign.»

He said that he was «very happy» about the result and about «the big margin» by which he won, adding that now is the time «to move forward with the projects.» As far as the club goes, he said that “if we are able to be together and united, we will always be stronger.”

He also linked this growth to the club’s independence from politics: «We will continue to grow and win if we remain independent of the political and economic powers. If we are able to make this project a common space for everyone. Together we are stronger. We will try to live up to the members’ expectations. We’ll work hard and sweat blood and tears for our colours just like Puyol, Xavi, Abidal and Messi.» He finished his speech with a «Visca el Barça y visca Catalunya» («Long live Barça, long live Catalonia.»)

As soon as the first, unofficial results started to come in, Bartomeu’s box, where he was waiting with the rest of his team and family, erupted with euphoria. «I’m very happy, the election day has gone perfectly. I am very pleased with the turnout. Now we have to wait for the definitive results» he recognised, exultant and triumphant even before the final results came in.

The voters, with this overwhelming victory, have valued more highly the recent success on the pitch than Bartomeu’s implication in the ‘Neymar case’. It should be remembered that he reached the presidency originally after Rosell’s resignation because of the problems the club was having with the law, which have continued to weigh down on the new president.

Bartomeu left the Camp Nou to go home and await the official results and, once they had been announced, returned to the stadium. This was the triumphant atmosphere in his box:

According to TV3, by the geographical distribution of the votes cast, Bartomeu and Benedito were the candidates most supported by Barcelona-based voters, Laporta drew more support from members outside of Catalonia and Freixa attracted more from outside the city.

Looking at the votes by gender, all the candidates received more votes from men, with the exception of Bartomeu, who got the majority of women’s votes, according to TV3.

The starting grid for the Chinese Grand Prix