Villarreal claw back a point in the second 45 after going in 0-2 at the break Barça also slip up Barcelona were unable to get more than a draw (2-2) at Villarreal instead of delivering what might have been the definitive blow in the league title fight, after Atlético’s slip-up on Saturday. The ‘Yellow Submarine’ […] 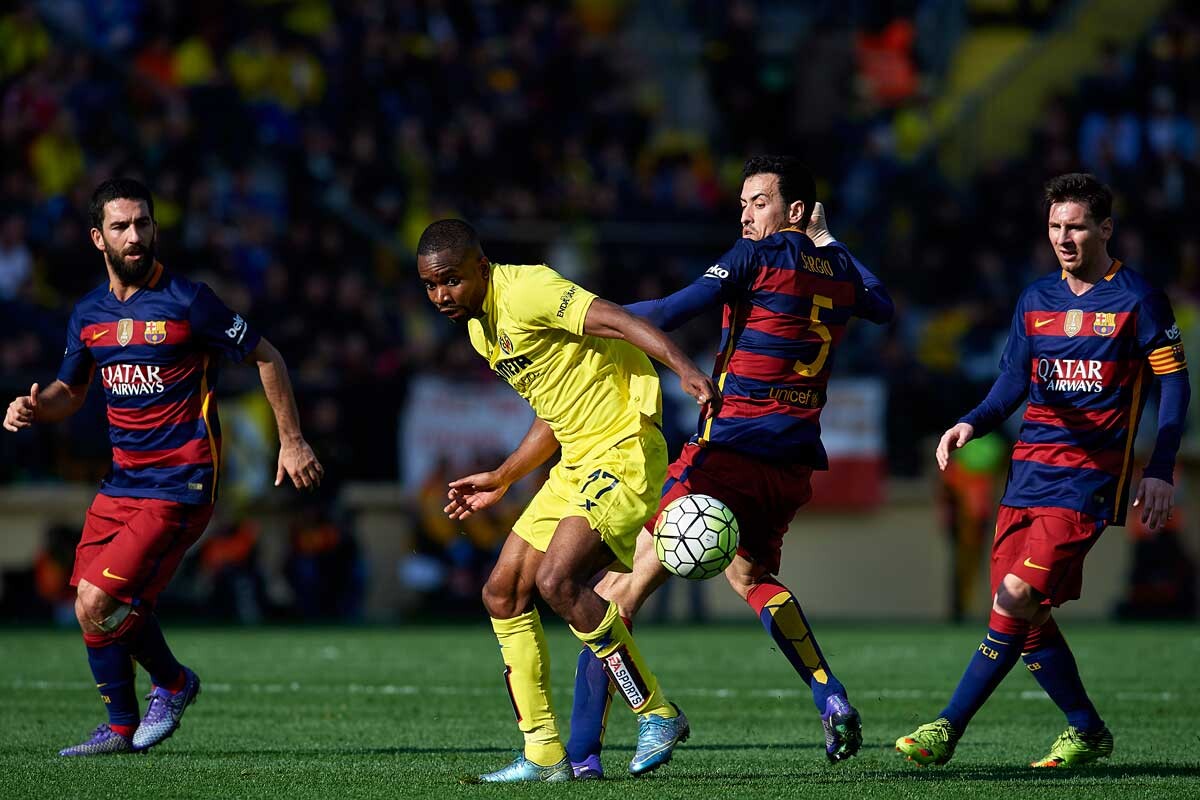 Barcelona were unable to get more than a draw (2-2) at Villarreal instead of delivering what might have been the definitive blow in the league title fight, after Atlético’s slip-up on Saturday. The ‘Yellow Submarine’ fought back from 0-2 at half time in a frantic second half, one in which they had the leaders on the ropes, even though they had some tired legs from Thursday’s European exertions.

The game started off with a scare for Barcelona. Hardly a minute had passed when a pass from Bakambu bounced off Trigueros and then Arda Turan before hitting the post and being smothered by Claudio Bravo. Villarreal had come out firing on all cylinders and this almost cost Barça dear. A few minutes later, Bakambu gave Luis Enrique another fright. The Villarreal forward got away from Piqué with a clever back-heeled control, but Bravo was quick to close him down.

Barça then stepped up the pace a little, and Rakitic took a shot from the edge of the area that went a little wide, but which changed the script somewhat. From then on, Barcelona started to push Villarreal back and the hosts barely got out of their own half. On minute 20, Rakitic latched on to a rebound after a free-kick taken by Messi, to put Barça ahead. From then on, it was one controversy after another: a handball by Piqué that went unseen and unpunished -which would have been his second-, Marcelino was sent off for protesting and, shortly afterwards, the penalty that Asenjo committed on Neymar. This time the Brazilian did not miss from the spot, and Barça doubled their lead to go in looking comfortable with a 0-2 score at half time.

The game opened up after the players returned from the dressing rooms. Villarreal threw themselves into attack and, after a first warning by Trigueros, whose shot from the edge of the box  fizzed just wide, Bakambu pulled one back for the hosts. The Congolese player slotted in a ball that Bravo had parried from a shot by Denis Suárez. Barça were enjoying less of the possession now, suffocated as they were by a Villarreal side that had rallied to the cause and were pushing the visitors back more and more. The luck that had deserted the yellows in the first half came back in the second, when a corner bounced off the arm of Mathieu, who had only just come on for Piqué, and went into his own net.

Barça could barely contain a euphoric Villarreal after the leveller. Marcelino’s men were not content with the 2-2 and went for another, even though this meant danger at the back. Neymar, however, was not at his best in the final yards and Barça were unable to take advantage of their counter attacks.

The Blaugranas were not lacking in chances in the final minutes, though. In a situation not unlike the one where he scored the opener, Rakitic could have made it 2-3 after a bad clearance by Asenjo, but the Croatian fired high and wide. The home ‘keeper then had to intervene to make a stop that saved the point for his team, one that leaves them six ahead of Sevilla,  depending on what the Andalusians manage to achieve in their visit to the Santiago Bernabéu this evening.