Barcelona and Sevilla, kings of Europe over the last decade

FC Barcelona and Sevilla FC play for the continental Super Cup in Tbilisi, another show of Spanish dominance and both teams’ golden decade 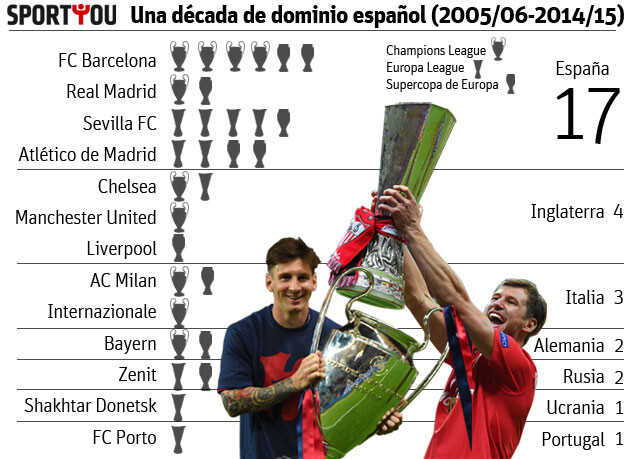 For the second year running, the UEFA Super Cup sees two Spanish teams come face to face. FC Barcelona and Sevilla FC meet in Tbilisi, the capital of Georgia, with the first official title of the season at stake. Whatever happens, whoever wins, Spanish football is assured of its eighteenth European title in a decade in which it has stamped its mark on, and dominated, the continental game. Over the same period, all the other countries put together tally only thirteen continental titles. Tonight’s contenders are also the leading exponents of this success. Both have added considerably to their trophy haul since the 2005-06 season and have lived, or continue to live, through their golden age during these years.

For Barça, the game is the first hurdle on their way to the coveted ‘sextuple’, the name coined six years ago after the conquest of all six titles by the team managed by Pep Guardiola. After winning the Liga, the Copa del Rey and the Champions League, Tbilisi is the first station on a route that includes stops in Bilbao (next Friday, Athletic Club await, for the first leg of the Spanish Super Cup) and Japan, where the FIFA Club World Cup will be played in December. IF they win it, it would be the azulgrana club’s fifth world title, and with an additional prize: Barça would become the club with most international titles to their name, 19, one more than Real Madrid, AC Milan and Boca Juniors.

Sevilla are in search of their sixth European title in less than a decade, their second in this competition. The last time they won it was, precisely, against Barcelona, at the beginning of the 2006-07 season. A year after losing 2-0 to Real Madrid in Cardiff, Unai Emery is looking for a double victory, since apart from the obvious lure of the trophy itself, as a manager he has never overseen a win against FC Barcelona, despite his teams usually putting in good performances against them.