Barcelona lift the league title once again, two years on from their last triumph in the regular tournament, and the way in which this Barça have achieved it is remarkably similar to the way it panned out in the 2012-2013 season. On both occasions the team had finished second the year before, had changed managers […] 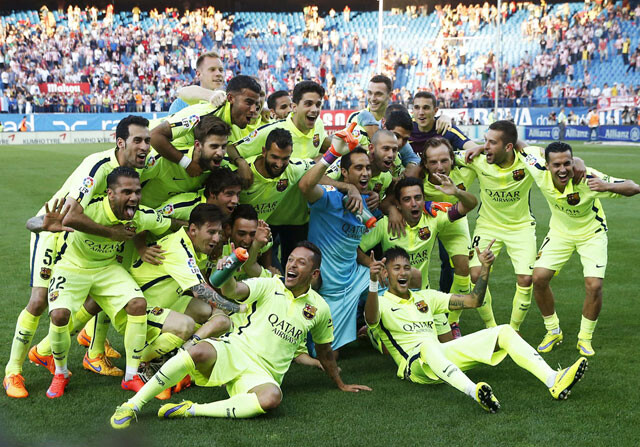 Barcelona lift the league title once again, two years on from their last triumph in the regular tournament, and the way in which this Barça have achieved it is remarkably similar to the way it panned out in the 2012-2013 season. On both occasions the team had finished second the year before, had changed managers in the summer, and the Vicente Calderón was the stage on which they celebrated.

This Barça will not reach 100 points, as Tito Vilanova’s side did in 2012-13, with which they equalled the record set the year before by Mourinho’s Madrid, but they have exceeded expectations this season, when not so long ago, despite good results, many doubts had been raised at ‘Can Barça’.

The talk then was of a more pragmatic Barcelona, one that played more on the counter-attack and was less stylish than in previous seasons. Not so attractive to watch, this new Barça was very efficient. The team this year has a positive goal difference of +89, compared to the +75 with which Vilanova’s side finished two years ago. The difference is to be found in the goals against column: Barça have only conceded 19 this season, as opposed to the 40 put past them in 2012-13. Luis Enrique’s Barcelona are a much sharper team and one that are more rock-solid than was expected at the beginning of the season.

Without Puyol and Víctor Valdés

The departures of Víctor Valdés and Carles Puyol seemed to leave a gap in the club that could not be filled. For good reasons, two of the pillars that had for so long shored up the defence when the excessivly attacking style of the team left spaces at the back, were leaving. Mascherano spoke of how last season the team had tended to commit excessive errors and the recently-signed Mathieu, Bravo and Ter Stegen, as well as Zubizarreta who endorsed them, somehow did not convince everyone at the club.

However, and against all the odds, Piqué has ended up giving his best performance over a complete season since returning to Barcelona, and Mascherano and Mathieu have taken turns as his partner in the centre of the defence, without anybody noticing the difference, and have given solidity to the back four.

Between the sticks, both bravo and Ter Stegen, one in the league and the other in the cup competitions, have proven Zubizarreta, who was fired in January right, and now nobody misses Víctor Valdés, which is quite some feat.

Lastly, a special mention must go to the attacking ‘trident’ of Luis Enrique’s Barcelona. With Messi, Neymar and Luis Suárez in cracking form, the team is capable of anything. Messi, with 41 goals, is close to the 46 he scored two seasons ago. Neymar and Suárez, meanwhile, with 22 and 16 strikes respectively, notably improve on Fábregas and Villa’s stats from 2012-13. Those two were the top scorers after Messi in that season, netting 11 and 10 times respectively.

With Tito, top of the table from the start to the end

In April 2012, in the middle of a whirlwind season, Pep Guardiola announced that he was leaving the club when his contract expired on June 30th. At the same time, it was announced that Tito Vilanova, who had been Pep’s assistant, was to be his successor.

With Vilanova on the bench, Barcelona managed the best-ever start to a season in the history of La Liga, winning 13 and drawing just one of the first 14 games. Tito had to leave his post in December owing to a relapse in his serious illness, and Jordi Roura took over at the helm until Vilanova returned from treatment in New York, in April 2013. That season, the team remained top of the league from the opening game until the last.

Tito Vilanova left the team at the end of that season in order to continue with treatment for his illness, which was incompatible with his functions as first team coach. Eventually, Tito lost that battle and passed away almost a year later.

Gerardo ‘Tata’ Martino was chosen to replace Vilanova and, after a trophyless season, the very day after the 2013-14 season finished, Barcelona announced that they had hired Luis Enrique as manager for this season. After the success that Guardiola and Vilanova had brought, Barça once again chose someone who knew the club from the inside to lead the new project.

With Lucho at the controls, Barça also topped the table in the early stages of the season but, after two straight defeats, in the Clásico against Madrid at the Bernabéu, and against Celta at home, Real Madrid took over in first place. The Blancos then topped the table for 15 weeks, but after hitting a low point in March, and Barça’s victory in the return match of the Clásico, things turned around again. Luis Enrique’s side regained the top spot after game 26, and have not let go of it since. Different routes to the same goal: the title.

A curious fact is that Tito Vilanova’s Barcelona were also crowned champions the weekend in which they visited the Calderón, while Real Madrid travelled to Espanyol’s Cornellà stadium, exactly the same as this year, although two seasons ago it was in week 35 whereas this time around it happened in week 37.

They have not won the league with such a points difference, but this Barcelona have the triple within their reach as they are in the final of both the Copa del Rey and the Champions League, while in the 2012-13 season the Culés were knocked out in the semi-final of each competiton.

Barcelona are champions once again, two years on, but Luis Enrique’s side can also make history. It is not just a dream, with Messi back to his best they have more than enough reasons to believe it is possible.