Two Sevilla goals in six minutes condemn Barcelona to second league defeat A costly nap for Barça Unai Emery has a great weight off his shoulders. With Sevilla‘s 2-1 win, the Basque can now say he has beaten Barcelona. It has taken him a long time, but his team knew where to hurt a Barça side that were […]

A costly nap for Barça 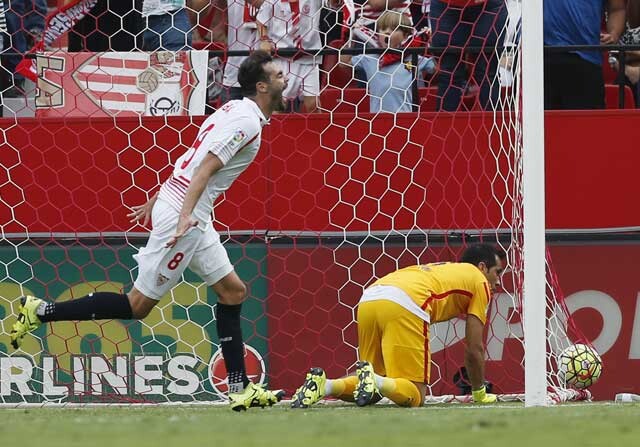 Unai Emery has a great weight off his shoulders. With Sevilla‘s 2-1 win, the Basque can now say he has beaten Barcelona. It has taken him a long time, but his team knew where to hurt a Barça side that were a bit fragile in defence and who paid dearly for the ‘siesta’ they took after the brea. In just six minutes, Krohn-Dehli and Iborra scored the goals that won the game. Neymar, from the spot, made it 2-1, and Sergio Rico, the woodwork and a good Sevilla side managed to hold on to.

Sevilla returned to their home stadium, the Sánchez Pizjuán, with an urgent need to change the mood after their disappointing performance in the  things after the  defeat against Juventus. Barcelona, true to their essential style, tried to play out starting from Claudio Bravo, but were up against opponents who pressed high up and made it hard for them.

Summary and stats from the Sevilla – Barcelona

The first exchange of blows came in the first minute, when Iborra shot over the bar. Barça reacted and, shortly afterwards, Neymar, making his 100th appearance in the blaugrana shirt, forced Sergio Rico into a diving save. The Brazilian was also involved in the clearest-cut chance of the first half when his free kick hit the post, bounced on to the goalkeeper’s back and then along the goal-line. Coke saved Sevilla by slicing the ball away just when Piqué was preparing to push it over the line. Before that, Kevin Gameiro had given Barcelona a reminder of what a tough match they were in with two chances, both of which were kept out by Bravo. Luis Suárez then took over where ‘Ney’ had just left off, but the Uruguayan was also thwarted by the woodwork, this time specifically it was the upright.

The half-time break suited Sevilla, who in the first move from the kick-off were already threatening Bravo. Seven minutes later, a long run by Gameiro ended up with the ball at the feet of Krohn-Dehli, whose first-time shot lashed into the back of the net. The Dane, who had coincided with Luis Enrique at Celta, then served up the second goal on a plate for Iborra, who just got enough of a touch on the ball to slip it past Bravo.

Luis Enrique reacted, and sent on Dani Alves and Sandro to give Barça more attacking bite. The changes benefitted the team, but once again they were not clinical enough in front of goal, although Rico, it has to be said, also did a lot to keep them out with his saves. The blaugrana siege now began, although they were unable to open the gates of the fort though open play. It was only from the penalty spot that Neymar was able to get past Rico, because the post once again frustrated Barcelona, this time after an effort from Sandro. The visitors tried every which way, but in the end Sevilla’s fort proved impregnable.