A who’s who of central defenders that Madrid could sign

Sergio Ramos’ future at Real Madrid is in the air. Negotiations for his contract renewal are at a standstill, the positions of both parties are very far apart and Manchester United are watching the situation closely. The English club will try to use David de Gea as a bargaining chip to get the Blanco defender. […] 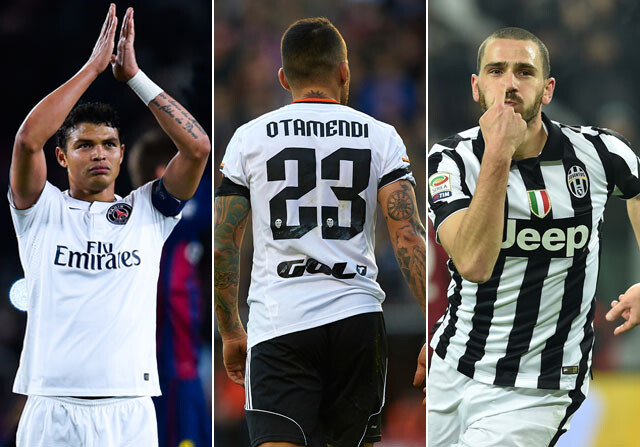 Sergio Ramos’ future at Real Madrid is in the air. Negotiations for his contract renewal are at a standstill, the positions of both parties are very far apart and Manchester United are watching the situation closely. The English club will try to use David de Gea as a bargaining chip to get the Blanco defender.

Meanwhile, at the Santiago Bernabéu they are combing the market in search of central defenders who could replace Ramos should he finally leave the Spanish capital. Here are the candidates.

–Otamendi: the Argentinean has already expressed his intentions to leave Valencia, but the club have stated firmly that whoever signs him will have to pay the €50 million that his buy-out clause is worth. Manchester United are interested.

–Thiago Silva: PSG captain and  one of Brazil’s flagship players, he is under contract with the French club until 2018 and earns around €10 million a year, pretty much what Sergio Ramos is asking for.

–David Luiz: Thiago Silva’s partner in the PSG defence, he was signed for €50 million only last summer. It will be neither easy nor cheap to prise him away from the French capital.

–Hummels: like his team, Borussia Dortmund, the German player’s performances have been under par this last season, and he has had various physical problems that have kept him out of action. With Jurgen Klopp now departed, this summer could be a good time to try to sign him, but last season’s showing means there are doubts.

–Bonucci: an undisputed figure in the defence of the Juventus side that carried off the domestic double and came runners-up in the Champions League. He is under contract with ‘La Vecchia Signora’ until June 2017.

–Chiellini: Bonucci’s partner in Turin, he missed the Champions League final through injury. His age might be a problem, he will be 31 in August.

–Alaba: Guardiola has used him as a central defender, but he performs best when playing at left back. He has had some important injuries during this last season, one in each knee, that have kept him out of action for five months in total.

–Marquinhos: another of PSG’s Brazilian central defenders. The Parisians paid €30 million for him two years ago and in March of this year he extended his contract until 2019. He is one of the most highly-regarded young central defenders right now.

–Aymeric Laporte: he is 21, the same age as Marquinhos. He has been a fixture in the Athletic Club defence for the last two seasons and renewed his contract until 2019 in May. His buy-out clause is €50 million.

–Alderweireld: still the property of Atlético de Madrid, the Belgian has played this last season on loan at Southampton. The more than likely departure of Miranda makes the possibility of this Rojiblanco signing for Madrid even more complicated.